Troy and I had our Thanksgiving dinner a little early this year. We had some family and friends in town so we went ahead celebrated on Saturday evening. Honestly, Cajuns don't need much of an excuse to have a gathering with lots of good food! 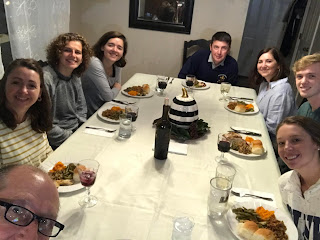 Troy was in charge of the fried turkey and I took care of everything else. Here is the step-by-step for my venison rice dressing:

Brown 1 lb of ground venison in a couple tablespoons of olive oil. While it is browning, season with black pepper and Tony Chachere's, to taste. 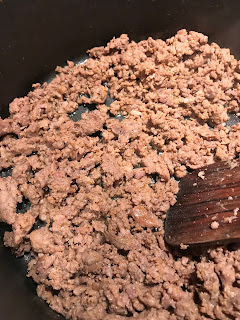 Once browned, add 1 small onion, diced and 1/2 of a red and green bell pepper, diced. Cook until the onions are translucent. 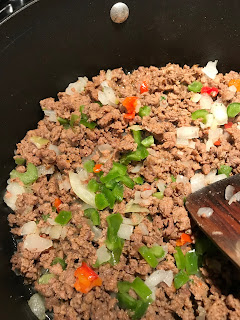 Add 1 cup of uncooked long grain white rice, 2 teaspoons of Worcestershire sauce and soy sauce to the pot and stir.  Once combined, add 2 cups of beef broth. Bring to a simmer, cover with a lid and allow the rice to cook for 20 minutes. 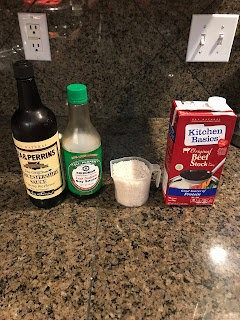 After 20 minutes, taste test for seasoning and serve hot. (If you don't have access to venison, you can substitute ground beef.) Enjoy! 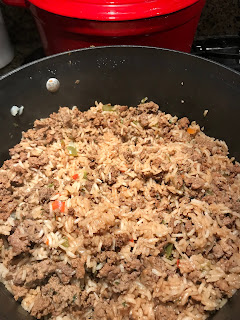 Fried turkey....once you've had a fried turkey, you'll never bake another one! Ideally, you want to pick out a 10-14 lbs bird, no bigger. For our "feastivities," we had a 12.54 lbs turkey. You should start the marinade process about 24 hours in advance....not a requirement...but, doing so allows the marinade to soak into the meat.

Seasoning the Bird:
The first thing you need to do is season the turkey with a good Cajun injector seasoning. Our go-to is Louisiana Fish Fry Products, Cajun Butter Marinade. We also like to drop a couple teaspoons of D.a.T. Sauce in the marinade. The D.a.T. Sauce has some large pepper flakes that will stop up the injecting needle, though. Filling the syringe can be tedious if adding the D.a.T. Sauce into the marinade.


For the timid, you can pour half of the jar of marinade into a small cup or bowl so that you don't cross contaminate the marinade jar with turkey. For the brave, use the whole jar! I prefer the whole jar method, injecting the bird in multiple locations on one side of the bird until I reach half a jar. Then, inject the rest of the jar in the other half of the bird. At each injection point, work the needle in different angles and depths as you slowly depress the syringe plunger. The goal is to get as much of the marinade as possible through different layers/locations of the meat. As you can see in the two photos below, try to cover as much ground as possible with each single needle stick. 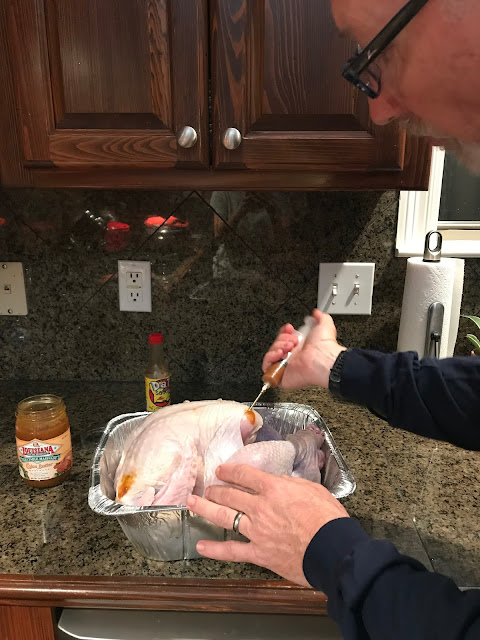 Frying the Bird:
In my line of work, we always preach and practice, "Safety First!" So, from a safety standpoint, there are several very important things to remember. First, always cook in an open space and not in a garage or under an overhang. Secondly, once your grease is up to temperature, turn off your fire before you drop the bird into the grease. After the bird has been lowered, re-light your fire. Lastly, lower the bird into the grease very slowly.

You obviously need a good, deep frying set up to fry turkey. We have a cast aluminum pot with a propane burner that we have used for years. We have used the electric fryers and have friends and family that use the air fryers. Me, I'm still old school and like using the gas burner.
You will want to use 2.5-3 gallons of peanut oil for frying a turkey. We are using three gallons of LouAna Peanut Oil. You can typically find this in the three gallon containers. However, we picked up some discounted, single gallon containers.

Remove your bird from the refrigerator and let it start coming to room temperature about 45 minutes before you start the fire. Depending on the outside temperature, the grease can take an additional 30-40 minutes to get to temperature. There are many schools of thought with regard to how long you cook the turkey and at what temperature. People will tell you 4 minutes per pound at 300°F. Some will say 3 to 3.5 minutes per pound at 350°F and add an additional five minutes. I'm usually somewhere in the middle of all this and really judge my time based on the grease temperature while cooking. And of course, my meat thermometer will give me the final say-so on how long I'm cooking the turkey. Personally, I like to shoot for the 350° F temperature. But, it doesn't always work out that way from a variety of factors....outside air temperature, how cold was the bird when it hit the grease, how quickly the flame can recover the lost heat, etc. For that reason, I like to drop my bird in the grease with a temperature no less than 375°F, knowing the temperature will drop. This fry, the grease was at a cool 390°F when we shut down the fire and slowly dropped the bird into the grease.
Again, shut down the fire and slowly drop the bird into the grease. There is still a lot of moisture/water in the bird that will "flash" as it hits the hot grease. This can create a hazardous situation if dropped too quickly. Here is what it looks and sounds like going into the grease.


The temperature immediately dropped 50°F and eventually settled in the 325°F for pretty much the duration of the frying time with the regulator turned all the way up. We started checking dark meat temperature about 35 minutes into the frying process and realized we were getting pretty close to ready to pull. The bird came out of the grease at 41 minutes with an internal temperature of 162°F. So, by my Cajun Calculus, that was roughly 3:15/pound cook time at 325°F. Here is a picture of the finished product.
We let it rest for about five minutes before carving into it. When you carve into the bird, the marinade and natural juices just begin to flow! Doesn't this just make your mouth water?!?!
Have a safe and thankful Thanksgiving, Everybody!

The Cajun Couple
Hi, welcome to our blog. We are the Green's, Anne & Troy. We created this blog to share our Cajun life & adventures. We enjoy the Gulf Coast, fishing, travel, food & family life. We invite you to join in on our fun.